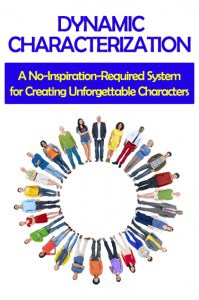 The character growth arc is about moving the character from one trait or state of mind to another.

The growth arc starts with the flaw or wound you chose for your character in lesson five. It ends with the character having transformed the flaw into a more positive trait or having healed the wound and no longer feeling like they need to engage in the protective behaviors associated with that wound.

The Structure of the Growth Arc

The basic structure of the growth arc is:

The character might go through multiple iterations of steps 4-6 before they finally get to step 7.

Let’s apply this structure to Steve, the greedy stockbroker from yesterday’s post.

Step 1: Character has flaw or wound, but is comfortable with it, and their behavior is shaped by the flaw or wound.

Steve has worked his way out of poverty and is now making half a million dollars each year as a result of his savvy investment skills. He put his sisters through college, and he’s now able to give his wife and daughter everything they could possibly want. His greed has driven him to become one of the best on Wall Street and to constantly seek to improve his skills so that he can amass even more wealth.

There’s not a whole lot of incentive for Steve to change right now, is there? Sure, he’d like to spend more time with his wife and kid, but he feels it’s more important to keep making money so that he doesn’t have to worry about his ability to take care of them. He hates that he doesn’t see his family enough, but he can’t stop pushing himself to make more money.

Remember from the example in yesterday’s post—his trauma is that his mother died of cancer because the family couldn’t afford health insurance, and Steve feels that it was his responsibility to take care of her. As a result of that trauma he acquired the unconscious belief that being poor means he’s doomed to lose the people he loves. So now he’s faced with the choice making money to protect his loved ones vs. spending time with his loved ones but risking losing them because he failed to make enough money to protect them.

Step 2: Something changes that makes the flaw less functional or the wound harder to protect.

Steve is offered a sketchy investment with a huge potential return. He knows he shouldn’t make this investment, and that his wife wouldn’t approve, but the money he’s expecting to make will put his daughter through grad school at Princeton. He justifies the bad decision by telling himself that he’s doing it for her. At this point in time, he doesn’t even recognize that his focus on making money is protecting him from his fear of losing the people he loves.

Step 3: This change creates problems for the character as they work harder to compensate for their flaw or protect their wound.

Oh no, the con artist who convinced Steve to invest ran off with the money and left Steve with a paper trail and an FBI investigation! It turns out that the investment was a Ponzi scheme, and hundreds of retired folks have been bilked of their life savings. All the evidence left behind by the con artist frames Steve as the ringleader.

Step 4: These problems create internal and external conflicts for the character.

For the first time in his life, Steve’s greed isn’t helping him, it’s hurting him. He’s lost his job at the investment firm. He’s humiliated by the news stories trashing him. His friends won’t have anything to do with him. Worst of all, his wife is furious—she can’t believe he would endanger their future like this.

Steve feels terrible. But his intentions were good, he rationalizes. He didn’t mean any harm. He was just looking out for his daughter.

And he’s got connections—he can fix this, right? This is just a temporary glitch, and soon he’ll be trading on the stock market again.

Steve holds back some crucial details about his interactions with the con artist who set him up, because those details would also lead the FBI to the one secret bank account that they haven’t found yet. And Steve’s going to need the money in that account to invest and make back his fortune once he gets out of this mess. His greed is still in full swing.

Step 5: The character’s attempts to resolve these new conflicts while at the same time compensating for the flaw or protecting the wound lead to disaster.

Steve’s not blaming his greed for getting him into this mess—he blames the con artist. And his solution to his current predicament? He arranges a meeting with one of the few friends who’s still talking to him, and through that friend, attempts to bribe the prosecuting attorney to make a mistake that would allow Steve to get off on a technicality.

Guess how that works out?

Meanwhile Steve’s assets have been seized, his wife and daughter have been forced to move in with friends, and jail time looks like a sure thing. No one believes Steve’s “not guilty” plea, not even his lawyer.

Step 6: This disaster causes the character to question their stabilizing belief.

Sitting alone in his jail cell after a demoralizing talk with his lawyer, Steve gets a call from his wife:  she wants a divorce. It finally hits him that he’s been wrong all this time. Money hasn’t protected him from losing his loved ones—not only that, but his greedy pursuit of money has caused Steve to lose his loved ones.

Step 7: This questioning allows the character to discover a better belief.

Steve decides that from here on out, he’s going to do the right thing, no matter what it costs him. He may have lost his family to greed, but he can try to help the people who lost their life savings to the con artist.

Steve calls his lawyer back and asks him to arrange a meeting with the FBI. He divulges the information that leads the FBI to his last remaining stash of money—as well as to the con artist. The real villain is caught, the stolen money is handed over to the authorities to be returned to the con artist’s victims, and Steve is offered a community service sentence in exchange for his help in catching the con artist.

Step 8: A new trait arises from the better belief (which is demonstrated through new behavior).

Steve reunites with his wife, swearing that he’s giving up his job as a stockbroker and begging forgiveness for his mistake.

She forgives him, and together they use the money that was returned to them—the money that Steve gave the con artist months ago—to start a foundation that pays for cancer treatment for those who can’t afford it, which they name after Steve’s mother. Now that Steve is freed from the crippling belief that he should have been able to prevent his mother’s death, he’s free to address that personal tragedy in a meaningful way: by helping others who are in the same situation that killed his mother.

Notice that he’s also demonstrating the new trait of generosity—which is the opposite of the flaw he started with.

Not all characters need a growth arc—if every single person in your story changed like this, the story would feel like a mess. But unless you’re writing fiction that’s completely plot-driven, your protagonist probably needs one. You might want to give your antagonist a growth arc that either contrasts with or parallels with the protagonist’s arc, for thematic purposes. Depending on the story you’re telling, you may decide that one or more other characters would benefit from a growth arc. It’s a judgment call with every character other than your protagonist.