You hear it at conferences, in forums and on email lists–writers talking about finding their authentic voice.

Some writers find it quickly.  Others may take years to discover it.

Because when we talk about a writer’s voice, we often don’t really define it as clearly as we should.

Without caring what anyone else is going to think when they read it.

Don’t like that stuff that comes out when you write without editing yourself?  It’s not because you’ve “lost your voice.”  It’s because you think you’re supposed to be someone else.

We all have an image of the perfect person we’re supposed to be.  Smart.  Witty.  Lyrical.  Profound.  Or whatever other qualities we’ve been raised to value in other people.

When someone tells you it took them years to find their authentic voice, they’re really saying one of two things:

Probably some of each.

And good for them.  Either endeavor requires sacrifice, self-awareness, and the courage to grapple with one’s inner demons.  I highly recommend demon-wrestling as a way of making yourself (and your life) better. The unexamined life really isn’t worth living.

But let’s call it what it is.  It has nothing to do with looking under the couch cushions and finding a misplaced ability to write like Kurt Vonnegut or Stephen King or <insert your favorite author here>.

When we write from the heart, we are forced to confront who we really are, right now, in this very moment.  And that person isn’t perfect.

So we have a choice.  We can say, “I must not have found my voice, because I don’t sound funny and poignant and philosophical when I write.”

Or we can say, “Hmmm, it looks like I’m a little sarcastic and kind of abrupt and down-to-earth.  What can I do with that?”

How do we start sharing our true selves with our readers?

We write so fast that we don’t have time to agonize over the phrasing of any particular sentence.

We write so fast that we don’t have time to stop ourselves from blurting out all those truths that have been festering in our hearts for years.

We write like our story is an out-of-control train about to leap the rails and hurtle over a cliff.

“Writing fast is a lot of work,” you point out.  “I get tired.  Discouraged.  Lost.  Sometimes I don’t finish the draft.”

If only there was a group of writers who were doing the same thing, in some sort of massive event where everyone comes together to write like maniacs and encourage each other for a whole month.

Oh, wait a minute, there is!  NaNoWriMo’s little sister, JulNoWriMo–July Novel Writing Month–starts a mere five days from now.  It costs…nothing.  The only obstacle between you and a breathless month of passionate noveling is the sign-up form that gets you into the forums.

Well, that and the courage to let your true self come out to play.

P.S. Don’t forget to go to the Downloads page on this blog and get the free Progress Tracker for Writing a Novel in 30 Days.  Keeping track of your word count helps you stay motivated! 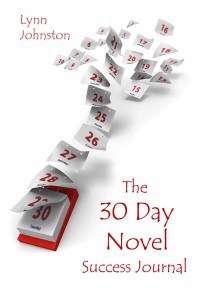 Thinking about participating in JulNoWriMo, but don’t have your story figured out yet?  The story blueprint in The 30 Day Novel Success Journal shows you how to figure out what to write each day using a combination of the hero’s journey, three-act structure, and the character growth arc.  Just follow the brainstorming prompts to figure out what happens next!

You’ve probably heard other writers talk about how they eked out writing time when they were first starting out. The new mom who wrote during her baby’s fifteen minute naps. The engineer who skipped coffee and cigarette breaks for the sake of getting a few more paragraphs written. The nurse who wrote an entire novel while waiting for the bus. Jane Austen is said to have written a sentence or two at a time as she paused between carrying out her other responsibilities.

It sounds like such a great idea, doesn’t it? Find all those little dead spaces in your schedule and use them to get more writing done.

That’s exactly what I thought the first time I heard one of those stories. I immediately booted up my computer, set the microwave timer to fifteen minutes, and…nothing.

I sat there for the entire fifteen minutes without adding a single word to my novel.

It wasn’t that I got distracted and started surfing the web or had a sudden, urgent need to reorganize my desk. Even though I had a plot outline, I simply didn’t know what to write next.

Maybe I’m the kind of writer that needs big blocks of time to write, I concluded. Maybe I need more warm-up time than other writers.

But in spite of that first failure, I still loved the idea of being able to turn all that wasted time into writing time. Again and again I attempted the fifteen minute writing exercise, and each time failed miserably.

Until a clever friend made a suggestion. “You’re a plotter,” she pointed out. “Maybe you need more structure to write in short bursts.”

Eureka! I discovered that I could start writing immediately if I gave myself very specific parameters. I decided I would spend ten minutes writing the part of the scene where the bus explodes.

During the next ten minute session, I wrote my protagonist’s reaction to the bus explosion.

In the next one, I wrote the part where the dazed bus driver tries to stop my protagonist from fleeing before the police arrived.

In other words, I broke the scene into beats (meaningful units of action) and focused on writing one beat at a time.

Writing in bursts throughout the day not only gave me an opportunity to make a bit of progress during my less-than-exciting workday, it also kept me in touch with my character’s world during the day.

In the evenings, when I did have a big block of time to write, I was eager to write more because I’d been thinking about my characters all day, and I didn’t need a half hour to get back into my heroine’s point of view. Once I trained myself to focus on a single beat of action rather than the whole scene, I found I could start writing within a couple minutes of opening my draft.

Another advantage of writing like this is that I no longer waste as much time getting stuck in the middle of a scene. I might not know everything that has to happen in a scene, but I can figure out the key events that have to happen at this point of the story, and I can write those in short bursts. Then later, I can go back and stitch those key events together by adding transitions and filling in the holes.

You don’t need a plot outline to do this, either. (Remember, my plot outline didn’t help me at all when it came to writing like this.) As long as you can figure out what the next beat in the story should be, you can set a timer and just write that beat of action.

I’m not suggesting that you stop setting aside big blocks of time to write. There’s nothing like the high that comes from having written an entire chapter and knowing that you’ve gotten significantly closer to finishing the story. Short bursts of timed writing are a way to boost your productivity outside of your regularly scheduled writing sessions.

Sometimes I use the timer technique even when I do have a big block of time, because it helps me build momentum. I make a list of all the beats in a scene, and then I go down the list, setting a timer for each one. As my momentum builds, the scene will take shape in my mind, and eventually I’ll realize that the timer went off forty minutes ago and I was so engrossed in writing that I didn’t notice. Focusing on one beat at a time can help you get more done during longer writing sessions as well.

Again, take a moment before each writing session to identify specific parameters. Before you write the dialogue layer, ask yourself: “What is the main topic the characters will discuss?”

Before writing the physical action layer, ask yourself: “What will the characters be doing while they have this conversation?”

Before writing the setting layer, ask yourself, “Where are the characters and what objects will they interact with?”

Writing like this probably won’t feel natural to you immediately. It took me about three weeks of training myself to write by focusing on single beats of action, and for most of those three weeks I wondered if I was wasting my time. Like any new writing method, this takes practice to master.

Set aside a fifteen minute block every day, separate from your usual writing time, and if it helps take the pressure off, work on something other than your work-in-progress. Remind yourself that this is merely a new technique that you’re learning. Don’t expect your first attempt to yield 500 words of pure gold—look at this as a training exercise that will increase your productivity over the next few months.

But I don’t want to write in short bursts, you say. I’ll just be getting warmed up when the timer goes off, and when I hear that beep, I’ll feel frustrated.

That will happen. Let me suggest that it isn’t a bad thing.

What’s being frustrated here? Your desire to write. When you feel that little surge of frustration because you want to write more, recognize that what you’re feeling is your creative drive.

Embrace that drive! It’s the source of motivation. You know, that thing that keeps you from procrastinating? A couple fifteen-minute writing sessions during the day can keep your motivation stoked, so that by the time you’re finished with dinner, you’re chomping at the bit to write the scene that you started on your lunch break.

When you feel that frustration, promise yourself that you’re going to sit down and write more that evening (or whenever your next writing session falls), and keep that promise, even if all you can manage is another fifteen minutes before bed.

The more you practice, the easier it gets to write in short bursts. You’ll train your brain to enter the flow state more quickly and easily, so you’ll waste less time getting into the story even when you’ve got lots of time to write. Even better, you’ll start looking forward to those fifteen-minute breaks in your day because the next two or three paragraphs are practically boiling over in your brain and you can’t wait to get them down.